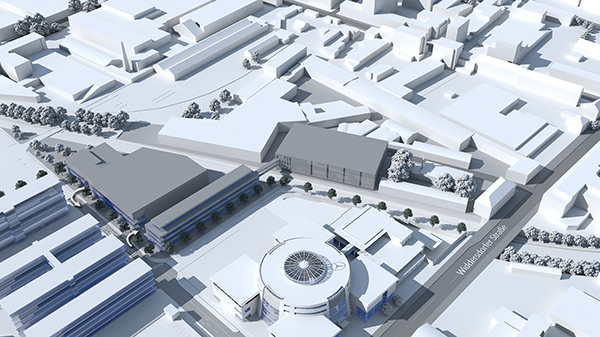 Cologne, October 20, 2020 – In recent years, Dr. Schönheit + Partner Consulting Engineering (S + P) has been working on behalf of various companies throughout Germany on how to maintain production in the city. In the Rhineland, next to Leybold GmbH and Romaco Kilian GmbH the Deutsche Infineum GmbH & Co. KG (INFINEUM) and Steinert GmbH (STEINERT) rely on Cologne as their production location. In order to be able to continue to produce competitively at their traditional location in the future, the companies need to reorganize their grown structures. S + P developed master plans "Urban Production 2030+" by means of factory structure planning and implemented them in parts together with the companies.

For German cities such as Cologne, commercial diversity and a new, compatible mix of living and working will become increasingly important in the future – a symbiosis which, for example, has the advantage for industry of direct access to sources of knowledge and creativity in the inner-city area. For employees living in the city, in turn, a higher quality of life will develop by eliminating time-consuming journeys between home and workplace. In order to make living and working compatible, S + P takes into account various specifications for the master planning of a factory in the city, such as green areas, mobility, noise protection regulations, emission limits and available limited space.

The STEINERT company, for example, is one of the world's leading companies in the field of sensor sorting and magnetic separation in waste and metal recycling, as well as mining. For the main location in Cologne, the factory planners and architects of S + P initially developed a Master Plan 2030+ for a gradual restructuring of the historically grown 35,000 m² site. The first realization step of the master plan includes the construction of the new multifunctional building on the existing site, which includes production and production-related administration. By restructuring the existing site on Widdersdorfer Strasse into a modern and future-oriented location, STEINERT will benefit from a good infrastructure, the retention of its existing employees, the proximity to additional, well-trained staff and lower costs compared to a change of location including the construction of a new factory.

The WirtschaftsWoche already reported on the relevance of concepts for an urban industry in an article from April 26, 2019 (WiWo, issue 18, pages 18-19 or digital). Since then, STEINERT has continued to make its site in Cologne future-proof on the basis of the "Urban Production 2030+" master plan drawn up by S + P.

"Thanks to decades of experience, people at STEINERT know how important personal cooperation is and the advantages of interdisciplinary exchange. I would like to take this opportunity to thank Dr. Schönheit + P. Consulting for their particularly good cooperation, which was remarkably effective, especially in the current Corona period," says Peter Funke, Managing Director of STEINERT. "The digital exchange was enormously thorough: in only 6 online sessions of 3 hours each, we were able to generate the same output as we would have done under normal circumstances in several months. That was very impressive.“

"We have focused on the future of urban production when designing our Master Plan 2030+," says Dr. Martin Halama, Managing Director, INFINEUM. "The core of the site planning in the north of Cologne is an urban campus, in which modern working environments convey to employees, customers and visitors an open corporate culture characterized by cooperation."

Dr. Martin Schönheit, Managing Director and Partner, S + P, says: "As a Cologne-based consulting and engineering company with operations in 25 countries, we want to support the city of Cologne in making urban production a positive experience as a location factor for the establishment of innovative production companies. To this end, the city has numerous new factory buildings and the experience of our lean management consultants, factory planners, architects and project managers as examples of success."

This site uses cookies. By continuing to use the site, you agree to the use of cookies. Dismiss